20 July, 2022 13:38
On July 20, RA Defence Minister Suren Papikyan, accompanied by the Chief of the Armed Forces General Staff, visited Army Unit 2. The head of the defence department toured the military units subject to the army corp, got acquainted with the work of rear support, the process of combat training of the troops. Suren Papikyan discussed with the command staff of the army corp a number of issues related to strengthening the combat capability of the servicemen, modernization of the infrastructure and improvement of the building conditions of the military units. 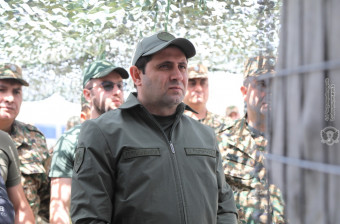 Later the Minister of Defence visited the eastern border zone, toured the combat positions, observed the front line furnishing works. The commander of the military unit reported on the construction and fortification works carried out on the front line, measures aimed at the safety of the servicemen. The Minister of Defence assured that all issues related to frontline security will be properly investigated and resolved.

During the discussions with the officers and servicemen on combat duty, the minister also referred to the reforms that started in the armed forces, the programs related to the social security of servicemen, assuring that these issues are always in the spotlight of the military-political leadership of the country.